AirPlay may come to Tesla cars, but what about CarPlay? 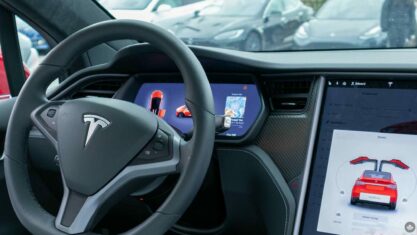 Tesla hypeman Elon Musk has been fielding some questions on Twitter, and now he seems to be considering adding AirPlay to Telsa vehicles.

Twitter user ShibaDoge (of course Musk would respond to this account) asked if their car would ever get AirPlay to help improve the wireless audio system in the car. In response, Musk said that he would discuss it with the audio team.

Will discuss this and other improvements with Tesla audio engineering. The new Model S and X sound system is incredible.

I have about 0.2 percent faith that this will actually come to any Tesla cars soon, but there is a slim chance since Apple has been adding AirPlay to even more devices like speakers and smart TVs in the past few years. However, I’d expect that Apple would rather hold out on this and hope that Tesla will just accept CarPlay as an infotainment option in the future.

Playing music in a Tesla is one of the most old-school experiences of the futuristic cars. Most drivers seem to use Bluetooth to stream their music which is a significant step down from the quality provided by a nice wired connection or even AirPlay. For someone that’s often hyping up the speakers in Tesla cars, Musk has paid very little attention to how modern drivers stream their music. It even took the company until mid-2019 to add support for Spotify streaming.

The post AirPlay may come to Tesla cars, but what about CarPlay? appeared first on CableFree TV.

France tries to save a whale that swam in the Seine