Signaling its ambitions to make a dent in the apparel market, Amazon today opened its first physical clothing store, Amazon Style, in the Greater Los Angeles Area. Offering a twist on the traditional experience, visitors to the Glendale, California shop at The Americana At Brand use an app to scan codes on displayed items from Steve Madden, Levi’s, Lacoste, and other brands to send them directly to a fitting room or pickup counter.

As TechCrunch previously reported, Amazon Style features hundreds of brands chosen by “fashion creators” and “feedback provided by millions of customers shopping on Amazon.com.” Scanning the QR code next to an item pops up a selector for sizes and colors, as well as details such as customer ratings, and adds the item to a list for later perusing.

Amazon Style doesn’t use the cashierless “Just Walk Out” tech found in Amazon Fresh and Whole Foods locations, instead opting for Amazon’s controversial Amazon One palm recognition service. But there is an AI element. As Amazon explains on the store’s webpage: “We’re bringing more looks and less clutter to in-store shopping. Our advanced machine learning algorithms continually refine to find looks just for you based on your preferences.”

Fitting rooms are unlocked using the app and sport touchscreens that let shoppers continue requesting items to try on. Items found in the store can be bought online or in-store and, either way, returned in-store. 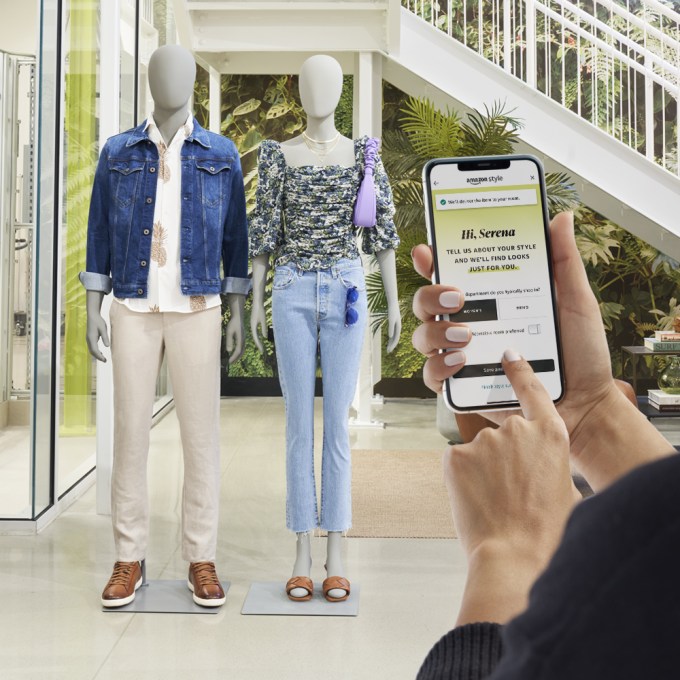 Amazon has spent years experimenting with technology in the fashion space, notably with Echo Look, a since-discontinued connected camera that combined human and machine intelligence to recommend styles, color-filter clothes, and keep track of what’s in customers’ wardrobes. The Echo Look tied into Prime Wardrobe, a program akin to those offered by Stitch Fix and Trunk Club that let users try on clothes and send back what they don’t want to buy.

In March 2021, Amazon passed Walmart as the top apparel retailer in the U.S. partly due to the pandemic-linked boom in online ordering, Wells Fargo reported. Analysts at the bank estimated that domestic sales of apparel and footwear on Amazon last year exceeded $41 billion, including sales through third-party sellers.

Amazon has been less successful where it concerns brick-and-mortar, having recently announced that it would close dozens of physical bookstores and mall pop-up kiosks to focus on other areas of the retail business. Still, Amazon’s physical stores generated roughly $4.68 billion in Q4 2021 as bets like Just Walk Out — and perhaps even barbershops — begin to gain traction.

The post Amazon flexes its retail muscle with a brick-and-mortar clothing store appeared first on CableFreeTV.