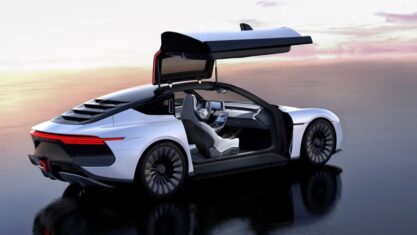 DeLorean has officially unveiled its electric vehicle (EV) model after it was teased back in February.

The rendered images of the DeLorean Alpha 5 EV were released on the website to those with early access on May 30th, showing a refurbished look, collaborated with Giorgetto Giugiaro’s ItalDesign, while keeping the same 1980s colour style.

The new DeLorean EV has been revealed, and surprise! It's a 4-seater! I have MANY thoughts on this car, but for now I've rounded up every new image and bit of info for you on @IGN: https://t.co/lhi7q1anoh pic.twitter.com/bkLjEapP8y

However, instead of the vehicle having two seats, like in the Back to the Future model, it will sport four seats along with electric-powered gull-wing doors. The EV is powered by a 100kWh battery pack that has a range of over 300 miles (400km).

DeLorean will publically reveal the vehicle on June 1st at 12am ET, followed by a formal showing Pebble Beach Concours d’Elegance car show on August 18th.