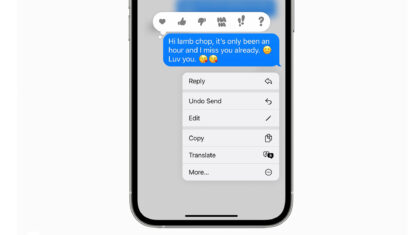 It seems editing sent messages with iMessage — one of iOS 16’s marquee features — might not work well when interacting with someone running an older version of Apple’s mobile operating system (OS).

According to 9to5Mac, in Apple’s second iOS 16 beta, anyone running an older version of the OS will receive the edited text after the original message, along with the words “Edited to.” Though this workaround makes sense, it defeats the purpose of editing a text in the first place.

Of course, most people update their devices to the latest version of iOS, but editing messages could prove problematic for anyone still running iOS 14 or iOS 15. It’s also worth noting that iOS 16 is compatible with devices dating back to the 2017 iPhone 8, and that only the 1st-gen iPhone SE, iPhone 6s, iPhone 7 and the 7th-gen iPod Touch don’t support new OS update.

In iOS 16, editing or unsending a message is done by long-pressing on the message within Apple’s iMessage app. This feature only works for 15 minutes after sending the original text.

For more on iOS 16, follow this link. A public beta of the OS update is expected to drop this summer, followed by the final version this fall.

Source: 9to5Mac Via: The Verge

Twelve is recycling captured CO2 into fuel, sunglasses and more

Twelve is recycling captured CO2 into fuel, sunglasses and more