Lalo launches an app to memorialize loved ones

The “Death Tech” industry might seem unsettling — do you really need to turn your dead relative’s ashes into a diamond? But when it comes to storing digital memories of loved ones, unwieldy Facebook groups and mass Google photos albums aren’t cutting it. Today, the Lalo app launches out of closed beta on the App Store and Google Play to help us remember those who have passed away.

The app comes courtesy of founder Juan Medina, who after eight years as a senior manager, left Amazon in March 2021 feeling burnt out and desperate to work on something he was passionate about.

“I started looking at the end-of-life space, really from my experience of losing my father at a young age,” Medina told TechCrunch. “Now I have my own family, and my daughter, being the curious kind of nine-year-old that she is, is saying like, ‘Hey dad, tell me about my grandfather, or tell me about South America, where you came from.’” 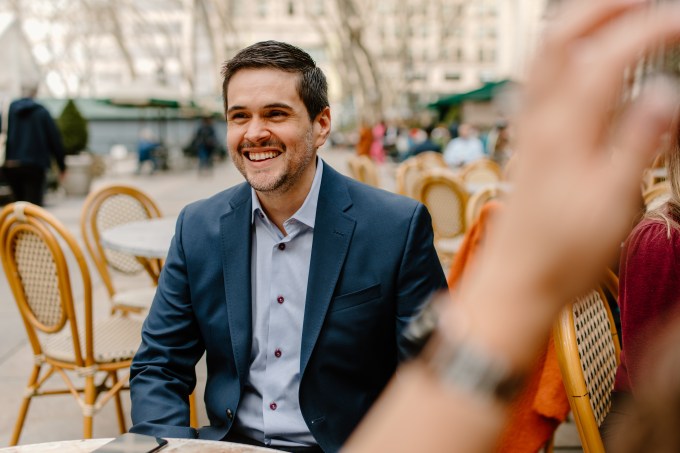 Named after Medina’s father’s nickname, Lalo functions like a digital scrapbook — when you sign up, you can create a “space” to share memories, then invite friends and family to collaborate, too. You can upload pictures, video, voice and text for free, but in the future, Lalo plans to charge around $25 a year for access to more storage space. Medina said Lalo will always have a free version, though, and that it won’t sell ads on the app, nor will it sell user data.

“I’m not here to profit off of people’s loss, and there’s certain things that we’re not going to do. That’s been a challenge with some investors,” Medina told TechCrunch.

In its closed beta with around 600 users, Medina and his team of five noticed that voice messages were particularly popular as a way to preserve storytelling. The app also offers prompts, which were developed with guidance from board member Dr. Robert Niemeyer, a psychology professor at the University of Memphis who is an expert on grief. These prompts include things like sharing recipes or telling the story of how your grandparents met.

“We tested the prompts with him, we walked him through the experience, and we said, ‘Hey, is this triggering, we don’t want to hurt anyone,’” Medina said. 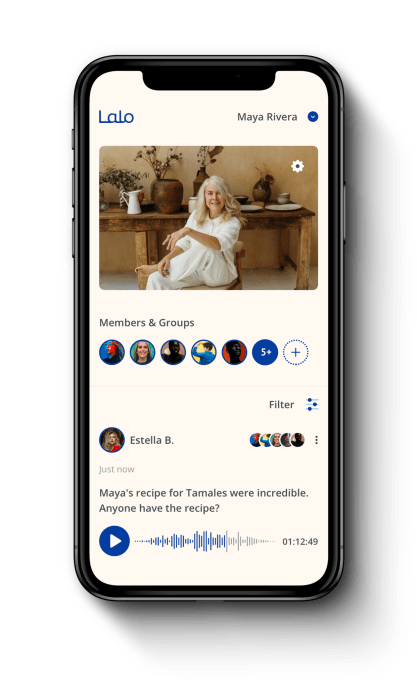 Once you create a space to store memories, you can add as many people as you want to the private, invite-only space. On its website, Lalo says that it will adhere to “privacy laws and data requirements from the beginning, rather than as a regulatory afterthought.” Users can ask for their data to be deleted at any time, and their data won’t be shared with anyone beyond the app.

Currently, Lalo uses Amazon Web Services to manage encrypted data. In the future, the company plans to store data in multiple locations as a backup.

“While there is always risk in storing data in ‘the cloud’ we want to do our best to make sure nothing bad happens to it,” Lalo says on its website.

At first, Medina had trouble finding funding for Lalo. So, he recorded a video of himself pitching the product and shared it to Twitter.

“Then, like magic, we were able to raise about $200,000, just from angels on Twitter,” Medina said. Since then, Lalo has raised another $250,000 from the same angel investors reinvesting, in addition to Overlooked Ventures, a fund supporting underrepresented founders at the pre-seed stage. As a Brazil-born founder with parents from Bolivia and Colombia, Medina is among a small cohort of Latinx founders backed by venture capital. According to data from Crunchbase, just 2.1% of VC investment went to Latinx founders in 2021, up from 1.7% the previous year.

“This word is kind of overused in VC, but they’ve created a community of founders,” Medina said of Overlooked Ventures.

Naturally, Medina isn’t the first founder to realize that we don’t have a great digital mechanism for storing and sharing memories about the dead. Memories.com seems to serve a similar purpose, but Lalo is far more polished and tech-forward. Another competitor is HereAfter AI, which preserves memories like Lalo, but takes things a step further and uses AI to allow you to essentially talk with a chatbot of the deceased. You can ask a smart speaker like an Echo or Google Play questions like “tell me your earliest memory,” and you’ll be served a pre-recorded message of a story your loved one told before they died. Other companies like Replika and the now-defunct Eterni.me took things a step further to try to recreate your consciousness so it can live on after death (pretty creepy, if you ask me — did we learn nothing from “Upload”?).

But Lalo’s simplicity makes it a product that you can actually imagine using. It’s not too obtrusive. It’s just a more dynamic, functional way to memorialize those we’ve lost. As much as the app revolves around the process of documenting and grieving after death, Lalo’s social nature creates space to deepen your connection with those who are still alive.

The post Lalo launches an app to memorialize loved ones appeared first on CableFreeTV.