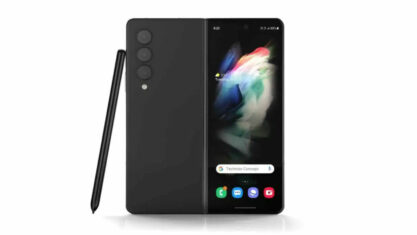 This concept comes from Technizo Concept, and it’s based on previous leaks and CAD-based renders.

The Fold 4 sports a more boxy, flatter design compared to last year’s model. The cameras protrude from the back, but there’s no island for the sensors, unlike its predecessor. This is a design that’s evidently inspired by the Galaxy S22 Ultra.

The Fold 4’s display is also wider than the Fold 3, and it sports a side-facing fingerprint scanner on the right-hand side alongside its volume up and down buttons.

Unlike previous rumours we’ve seen, this latest leak indicates the Fold 4 won’t feature a storage slot for the S Pen.

It’s possible that the Galaxy Fold 4 will feature Qualcomm’s Snapdragon 8+ Gen 1 chip, but when Qualcomm listed the name of partners that will be utilizing the new processor, the company omitted Samsung from the list.

Finally, the Fold 4’s display crease is expected to be not as pronounced as the Fold 3’s, and it will likely feature a smaller hinge.

We expected Samsung to announce the phone in August or September later this year.