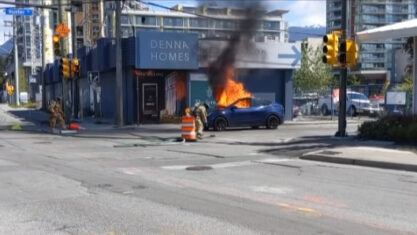 Transport Canada is investigating a fire incident that involved a Tesla Model Y.

The incident, which took place in Vancouver on Friday, May 20th, drew attention after the driver of the vehicle struggled to exit the vehicle, and reportedly had to “smash his way out,” according to Electrek.

Transport Canada has notified Tesla about the incident, and the two will inspect the vehicle to identify the cause of the fire.

Jamil Jutha, the owner of the Tesla Model Y, said that he bought the vehicle just eight months ago.

“I had to smash the window to get out of the car. I kicked through the window. Everything stops. The power didn’t work. The door didn’t open. The windows didn’t go down so I’m thinking I need to get the f*ck out of this car so I kicked through,” said Jutha in the video.

The source of the fire is currently unknown. It’s highly likely that the battery was the initial culprit, but we’ll have to wait to see the results of the investigation to be sure.